No longer an orphan. 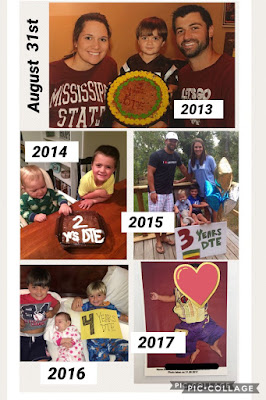 We have some BIG news! I haven’t posted it until now because... well... nothing I could think to say had the ability to carry the weight of this announcement! So I have finally decided to just announce it and realize any presentation will fall drastically short.

On March 30th, 2017- a beautiful baby boy was born in a southern state of India known as Tamil Nadu.

On July 14, 2017 - due to unfavorable circumstances and a world full of brokenness, that baby boy was legally declared an orphan by the court system in his hometown.

On September 6, 2017 - the adoption coordinator had received all the updates she needed from the orphanage so she made a phone call to the Blackburn family to tell them that they had been matched.

On September 7, 2017 - Lee and I saw photos of the most beautiful baby boy in all of India!

And on February 15, 2017 - that same baby boy was LEGALLY DECLARED a Blackburn by a judge in India.

He is no longer an orphan. He is a son.

We did not realize we had PASSED court until last Friday when our agency called us. She said that the orphanage had reached out to them and let them know that we actually passed court!

I will never forget my coordinator saying, “It’s official. He’s your little boy!”

About the photo(s). I decided to post this photo to tell a small blurb of our amazing journey with Jesus. Before I do, please hear my heart. I fully understand that adoption always begins with brokenness. Family preservation and/or reunification is ALWAYS the goal. Unfortunately, that is not always possible. Believe me when I say that our hearts BREAK for the loss that Malachi’s birth parents have experienced, are experiencing, and will experience.

He has worked upstream in SO many ways in our lives and adoption. One small glimpse of His power at work is this:

We began our adoption journey in the Ethiopia program in January 2012. On August 31, 2012 we sent all of our paperwork to Ethiopia and that was called our DTE date (Dossier to Ethiopia). This date was significant because it was the day our agency officially put us on the waiting list for a child. This was also the way our agency identified us. We were “Blackburn family DTE 8/31/12.” All through our journey we celebrated and cried and mourned on August 31 because that was another year gone by without a photo of our boy.

This year, August 31st was a super weird day for me. I felt like we needed to take a photo because we had for 4 years. However, I decided against it because we were no longer in the Ethiopia program. We had switched to India.

So I didn’t take the photo.

And quite frankly, I felt like all the other photos we had taken were a wash.

Little did I know that on August 31st our coordinator had just matched us with our son! And 7 days later we would see his face.

That is a MIRACLE!

Don’t miss it!
For alllllll of our paperwork and allllll of his paperwork to line up. For his orphanage to upload him at the exact right moment. For allllll the years before. All of It.

And the icing on the cake?!

Remember that photo our family did not take this year?

It was the ONLY photo we have ever received of him that had a date on it. The only one. All the other photos do not have dates. If you zoom in the date reads 31/8/2017. They write day, month, year.

This ALSO happens to be the photo that we had to sign our names across and write “we accept S. as our son”

He gets all praise not because He performed a miracle.... but because of WHO HE IS!!

We can’t wait to tell Malachi about how God has been working upstream in his life, specifically in sending his son, Jesus!!

When do we travel?

Posted by Abby Blackburn at 4:57 PM

Thanks so much for your comments!

Abby Blackburn
My name is Abby Blackburn. I am married to my best friend, Lee. We have two biological sons, Miller and Chip, and are currently in the process of adopting a little boy from Ethiopia. We have not met him yet, but are requesting a 0-24 month old child. We plan to give him the name Malachi and cannot wait to see his face for the first time! Thanks for following our journey!